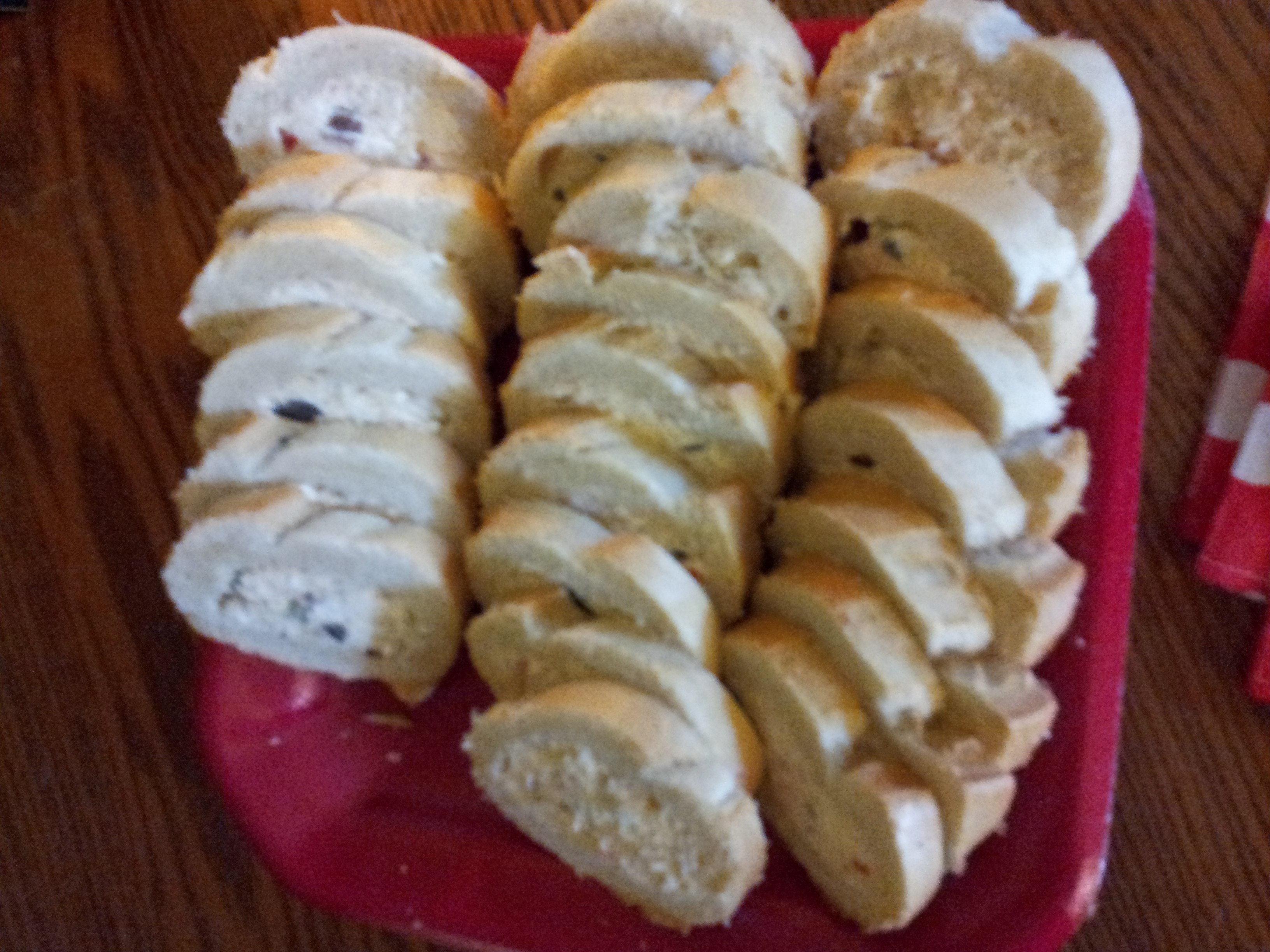 Ok, so one of my oldest friends, Grit McGrit, is getting hitched!

Recently, I threw a small bridal shower for her.
A lot of the food I made was inspired by things
I saw on the famous Pinterest Boards.  (I’ve
included links to the original postings as well
at the bottom of the post should you want to
reference the originals.

It was requested at the party that I post the recipes (hence the comment from my mom) and so I am.  I am going to start with the Stuffed Baguette as it got the most compliments.  It’s not as complicated as it seems, and I made way too much filling, so I have adjusted the recipe for that.  Please disregard the obscene amount of cream cheese used in the pictures!

Take the cream cheese out to soften, the softer, the easier it will be to mix.

The bread I bought was a take and bake french loaf.  It was about 2 inches in diameter, so slightly larger than most baguettes.  I put it in the oven, straight on the rack, no pan at 350 degrees and baked it for 15 minutes.  I then turned the oven off and let it cool with the bread still inside.  This gave the bread a nice hard crust which stood up well to the hollowing process.

Next, I worked with the filling.  I put everything in a bowl and I mixed it all together.  I know this may seem a bit complex and you may feel that this is too much for you, but I assure you, you can handle it.

I started out using a spoon, but quickly gave up on that and moved on to a mixer.

Next, cover the mixture and set it aside.  You don’t want to put it in the fridge, because then it will stiffen back up, but you do want to allow the flavors to meld.

When you start working on the bread, take these next two tips to heart:  1. let the bread cool ENTIRELY.  This will save your fingertips.  Don’t think, “well, if it is warmer, it will cut easier when I try to pull the middle out,” as this is not true.  Let it cool and be done with it.  2. cut the bread into smaller pieces, no larger than  twice the length of your chosen blade (so you can stick it in both sides and hollow out the middle).

Cut the ends of the bread off, just at the point where the width of the bread becomes regular.  You can eat them, or throw them away, or if you have one lying around, use a spare husband to discard them by filling them with the filling you just made and double-fisting them while watching tv.  The Boy is an excellent taste tester in that he will eat any thing I hand him without even asking what it is.  However, the best reaction I get is, “it’s pretty good babe”.  Of course, this is his highest praise, so I take what I get.

Using a sharp knife (I used a steak knife) cut a circle around the the middle of the bread.  Mine worked out perfectly so just over a quarter inch was crusty, this made coring the soft part of the bread out very easy.  If you find that your bread is soft, you may want to use a butter knife to ensure you don’t shear too much of the crust away.

Wrap the loaves in plastic wrap and refrigerate until serving.  Here’s another hint: don’t make the bread more than 36 hours in advance.  The bread will slowly soften and much more than that it will become soggy.

Moments prior to serving, remove the bread from the fridge and using a very sharp knife cut the bread into 1/4 inch slices.  Be prepared for this to be the hit of the party.  I made one whole french loaf for 6 women and every bit of it was gone.

The best part is you can make the filling anyway you like.  Maybe bacon and blue cheese, taco meat, cheddar, and jalapeños, or spinach and mozzarella, anything you like can go in this and the presentation will wow everyone.  Like I mentioned above, I made way too much filling, but it’s great with tortilla chips and crackers too.  I even used some of it in a white wine sauce to go over First You Get A Cow Pork Chops.  I’ll be sure to include that in the pork chop post so you can be inspired to use the filling in more ways in case you too looked at the bread and thought, “two cream cheeses is no where near enough for all this bread” (hint: this is not true, don’t believe your brain).

This Stuffed Baguette recipe is like bread and dip all wrapped into one. They are always popular at every party, and make great snacks or lunches. Chill them thoroughly before slicing for even cuts.