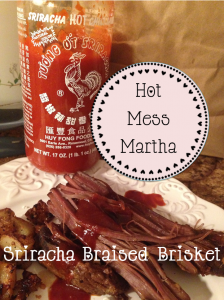 I dedicate this post to my friend Robert, at work, also known as Number 1, whose love of Sriracha and meat knows no bounds.  Thanks for always fixing the things I break.

If you don’t get that reference, this is probably not the blog for you.  Because I primarily talk about 3 things, The Boy, food, and the nerdy things I’m into.

However, if you do get that reference, welcome, and prepare for the best brisket recipe you’ll ever try.

Side note: this recipe is not for the faint of heart.  Or mouth.  But, it is probably my favorite brisket recipe because SRIRACHA.

This recipe comes about from The Oatmeal’s post.  You know how sometimes you’re really into something, but you don’t act like you’re really into it, because, I mean, who loves hot sauce that much.  But, then you end up in one of those crazy hot sauce stores, or you see something online and realize there’s a cult of people just like you, who seemingly love hot sauce way too much and you feel like your life is finally coming the fuck together?  That’s basically the story of this recipe.

Cooking with Sriracha = best. food. ever.

Included in this recipe is a Sriracha BBQ sauce.  It’s made from the juices of the brisket and peppers, and that makes it amazing.  However, if all you want is the BBQ sauce, I’ll explain how to make that so it tastes kinda as good, but not really because there’s no dead cow involved.

The key to making brisket, regardless of recipe, is to cook it nice and slow, simmering in some kind of liquid.  In this case, delicious sriracha.  I mean, there’s other stuff in there too, but let’s not get carried away about what’s important.  The easiest way to achieve this, is in a crock pot, as the recipe states.  However, if you don’t have one, you can cook it in a covered pan in the oven at 225 for 8 hours, or 275 for 6. 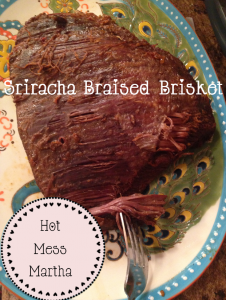 1. Pat the meat dry and let it come to room temperature.

This is a practice you should take with all your meats, prior to cooking them.  It will get the juices flowing before you add the heat and will give you a better tasting, and more tender meal.  Turn the meat on a platter so the fattier of the two sides is down.  You may want to trim some of that fatty layer off if the butcher didn’t do it for you.  Season the non, or rather less, fatty side generously with salt, pepper, and garlic powder.  The spices will settle into the meat as it comes to room temperature.

This is a garlic lover’s trade secret.  You’re going to put the garlic IN the meat.  First, flip it over, so the spices are down and the fat is up.  Then take a sharp and pointy knife and cut some slashes perpendicular to the grain of the meat.  (Don’t make them too big, you’re just putting some sliced garlic in there.  Then, hold the slits open and jam that garlic in the meat.

Put the brisket fatty garlic side up, then combine the broth ingredients (beef stock, Worcestershire sauce, minced garlic, sliced shallot, and soy sauce).   Pour that mixture over the beef, but don’t let it submerge it.  You want it about 2/3rds of the way up the meat.  This is the braising liquid.  Discard the leftovers, or heat it up for an au jus for people afraid of the glory of sriracha. 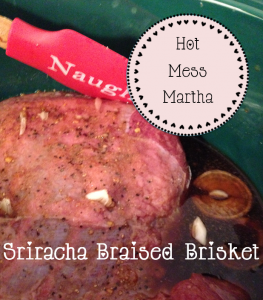 4. Make the paste of dreams.

Pour the paste over the meat (some will slide into the broth, and that’s ok).  You just want to make sure the entire brisket is covered.  I was going to put a picture in of that stage, but it looks almost identical to the above picture.  Reserve any leftovers to add to the BBQ sauce.  Though, I rarely allow leftovers of this.

You can cook it on high for 4-6 hours, but it’s best on low for 8-10 because the extra time really allows the meat to become tender. It will be done when you can pull it apart with your fork.  Scrape the remaining paste from the meat into the broth and stir it, this can be served as is for au jus, or used to make a BBQ sauce.  Once the meat has cooled for 10-20 minutes, take a knife and cut off the top layer of fat.  Shred it with a fork.

6. While the meat is resting, make the sauce.

The BBQ sauce is going to be made in a separate pan on medium low.  Combine a small can of tomato paste (2-3 tablespoons ish), 2 cups of the drippings (the stuff you mixed – paste and broth), 3 tbs. white vinegar, 2 cloves minced garlic, 3 tbs. Worcestershire sauce, 1/2 cup brown sugar, 1/4 cup molasses, and 3 more tablespoons of sriracha. Omit the broth if you are just making the sauce. Let that heat until bubbly, then add to a blender or food processor and blend until smooth.  You can serve this warm, or keep it in a container in the fridge.  I’ve no idea how long this officially lasts, because it doesn’t stick around in my house very long.

7. Revel in the glory of meat!

This is by far my favorite part.