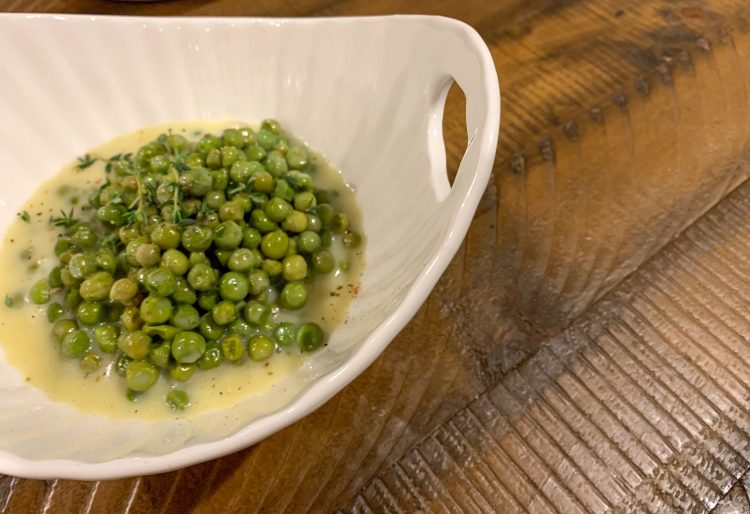 I have this theory, and it may be a purely an American sentiment, that if you want something to be deemed fancy, call it French. Don’t believe me, just ask the bloggers who are so passionate about calling macaroons macarons; but that’s another post for another day. I have feelings about that one. All this to say, I want to share this recipe for super fancy French-ish (read: not at all French, but involve a French cheese) peas.

What makes these peas French”? Brie cheese. Brie was invented in the Middle Ages in the Brie region of France. I won’t over nerd on you and give you the full history of brie cheese, but know this, it’s very interesting involving Emperor Charlemagne and an international contest where it was named “Le Roi des Fromages” (King Of Cheeses). But this post isn’t really about the brie. It’s also about peas!

I go through phases of my life where I am obsessed with different veggies. It was broccoli for a long time, then Brussels sprouts, and then green beans. In my life right now, peas are having a moment, but I can’t stand them frozen, and only like them prepared certain ways if they’re from a can. It’s fresh Spring Peas for me. I think that’s the trick with veggies, keep trying until you find a preparation you like and then go from there.

Getting fresh peas was difficult for a long time. Sometimes I’d find them at a farmer’s market or stall in the spring and summer, but that was about it, so I wasted so much of my life thinking I didn’t like peas. Then, Trader Joe’s (TJ’s) came along. They were the one place I could find fresh peas, and I bought them simply for that fact, only to learn that I. LOVE. PEAS.

For years, peas were easy to come by so long as I was near a TJ’s. Then this year came along, and I was like, “I need to spread the word of love that is peas”, and I made my family eat them at Thanksgiving. It was while shopping for Thanksgiving that I discovered that fresh peas were now available in my local Kroger! (I live about 30 minutes from my nearest TJ’s now). I was so excited I called my mom.

I needed to take the next steps outlined in the gospel of peas and spread the word to the world and put some recipes for peas on my entirely unpopular blog! This was sure to be a success.

There were immediate complications. Everywhere was sold out of peas. Every. Where.

It was like some ridiculous conspiracy against me. Or, more likely, I’m not the only person in love with peas and stock was low because the world is insane and supply chains are wonky, but I’m American and apparently we’re super into illogical conspiracies now, so I’m going to go with that.

I have to admit, there was a lot of drama in my life about the difficulty I had getting the dang peas. I finally had a week off from work, and I felt like I wasted the first few days driving all over the place trying to find freaking peas. At first, I tried to use online ordering (pandemic and all that), but I had difficulty because there were minimum purchase requirements and all I needed were the dang peas, plus, because they were sold out, they’d just be removed from the order and I’d have to go pickup everything except the thing I needed, so I just decided to don my mask and keep my distance and start the search.

6 stores and 2 and a half days later, I find fresh peas and bought 4 packs just in case.

I can’t begin to explain the wonder of these peas. The brie is creamy and buttery and that pairs so perfectly with the peas to make a heavenly bite. The fresh cracked pepper and fresh thyme on the top add a slight sharp freshness to the decadence of the brie and peas. They are insanely easy, and the flavor is out of this world.

Brass Tax: How It’s Made

Fresh peas are easy to cook. You’re going to boil the peas in saltwater for 5-9 minutes until they are tender. You don’t want to overcook them because mushy peas are not enjoyable, but you also want to cook them through so they are soft. When cooked properly, peas have a creamy, almost buttery texture, and that’s what we’re going for here. Hence why the blanching timeframe is so broad: you’ll need to test them as you go until you reach the perfect texture.

Pull them from the water and stir in the (rindless) brie. Top with freshly cracked pepper and fresh thyme for a delightful contrast to the buttery creaminess of the brie and peas. Serve this with herb-crusted rack of lamb for an upscale everyday meal or to celebrate a special occasion.

How To Serve Brie Peas

Because this recipe is so simple and light, it pairs as a side with almost anything, but don’t let that description fool you: these peas stand on their own. Above I have them as part of my Valentine’s Day Dinner with The Boy alongside roasted rack of lamb and parmesan-crusted potatoes. Somehow, on this plate of some of my favorite things, the peas stood out and had my heart.