Tweet Share Pin It Print
I have had a million-dollar restaurant idea.  It’s going to revolutionize the face of the food industry.  The Boy and I have come up with the perfect plan to make MILLIONS.  Only a little wine was involved.  I wanted to document it for the world to see on the internet so everyone would know it was my idea first.  That’s how these things work, right?  (it’s funny because that’s not how they work).
Anyhow, Mom and Dad, you’re welcome.  We’ve finally found a way to pay for your early retirement.
Before I tell you the idea, I feel that you need a little background on its development.  We were driving home from getting some pizza and I saw a food truck.  The Boy had once mentioned that he would like to start a food truck business.
Last night, my idea was brilliant, Bobby’s Burritos and Halupki.  I would make Halupki, pierogi, and kielbasa and he would make burritos, tamales, and nachos.
And that’s when it struck me.
Ladies and gentlemen and investors who are soon to be very wealthy, I give you the best idea to hit the food market since McDonald’s.
Chili. On. Stuff.
Yes, that’s right, Chili – On – Stuff.
We make a bunch of different types of chili:
traditional chili
Irish chili (made with beer!)
green chili
white chicken chili
I wish I were chili vegetarian chili
venison chili
brisket chili
cowboy chili
enchilada chili
cheesy chili
sausage chili
5 bean chili
really really hot chili
low cal chili
turkey and black bean chili
Danny’s Chili (which has no beans.  This chili would be developed solely to annoy The Boy’s younger brother who gets furious when you say chili with no beans because to him that’s just meat sauce)
Texas chili
6 pepper chili
pepper jack chili
sriracha chili
The list can go on and on (but I won’t for fear of this becoming known as “Bubba Gump’s Chili”).
So, here’s the premise, you come in and there’s all these different chilis and you get to pick what  stuff you want it on and what type of chili to top it with.  Things like hot dogs, fries, nachos, burgers, stuffed peppers, burritos, tamales, baked potatoes, tater tots, fresh made potato chips, fajitas, cheesesteak sammiches, or the ultimate, “chili on chili” where you get to mix 2 types of chili in a freaking bread bowl. YESSS.
BUT, WAIT! THERE’S MORE!
After you get your stuff with the chili on it, you go to the toppings bar which is filled with lettuce, tomatoes, sour cream, cheeses, poblano peppers, jalapenos, onions, crunchy tortilla chips, salsa of all types, grilled corn and other veggies, mushrooms, chick peas, and hot sauce.  And you load up your chili on stuff with magic.
See?  The game has officially been changed.  Step it up people, you’ve got a lot to live up to now that Chili – On – Stuff is in development.
UPDATED:  I just read this to The Boy.  His response?  “Sounds yummy”.  He never gets excited about anything, but truthfully, this is right up his alley.  I’m a little disappointed.
UPDATED AGAIN:  I have developed a logo for Chili-On-Stuff.  I think it truly defines us as a company. 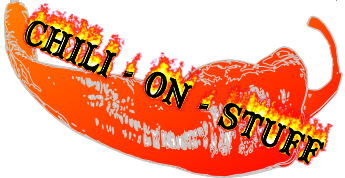 ANOTHER UPDATE:  My friend Christi from work has upped the game.  I appreciate her snarkless support of Chili-On-Stuff.  She has suggested that we combine my restaurant and The Boy’s food truck and have “Chili-On-Wheels”.  She even created my own logo for the trucks from the one I developed: 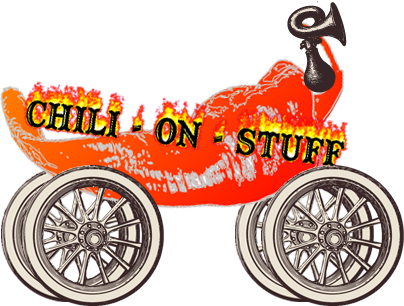 It’s like it was made for my serious business venture.  T-Shirts to come.
THIS JUST KEEPS GETTING BETTER.